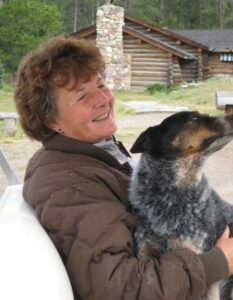 ch in Gallatin Gateway was inducted into the Dude Ranchers’ Hall of Fame during the 96th Annual Dude Ranchers’ National Convention held in Wickenburg, Arizona, January 17-20. Each year, this life-time achievement is given to individuals who have contributed to dude ranching and the western way of life.

In addition to this honor, 2022 marks another milestone event for the Elkhorn Ranch as it will be celebrating its 100th anniversary. A monumental achievement in Montana dude ranching history. The ranch also joined the National Register for Historic Places in 2016 as a Montana dude ranch with little change to its footprint or business model.

Linda is the granddaughter of Ernest and Grace Miller who founded Elkhorn Ranch in 1922 as a purpose-built guest ranch and has managed the ranch since 1989. The Elkhorn Ranch has been part of Linda’s life since she was a youth rider where her love for the rugged Montana landscape grew. Linda is known for her warm and friendly but no-nonsense attitude and has welcomed thousands of guests to Montana over the decades she has been a part of Montana dude ranching. Linda also served many years on the Dude Ranchers’ Association board or directors. To this day, Linda’s happiest on the trail sharing the mountainous country with her guests.

Congratulations to Linda! To learn more about the Elkhorn Ranch and their 100th anniversary, visit www.elkhornranchmontana.com.